Is there any examples (codes) for coupling of UDEC/3DEC and FLAC/FLAC3D?

Well, coupling UDEC to FLAC would be pretty difficult since they are completely separate programs. It is possible to couple 3DEC and FLAC3D since 3DEC is actually loaded with FLAC3D and you can run them both together (if you have both licenses).

The coupling is still non-trivial because the zones in 3DEC will probably not align with the zones in FLAC3D, so you will have to do some interpolation. Here is an example of how you could do it:
coupling.zip (10.8 KB) 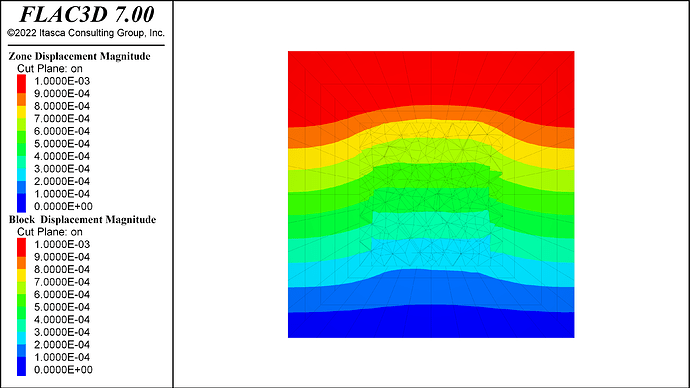 Thanks for the example @jhazzard.

In addition to @xiongyu’s question, I would also like to ask if Itasca plans to add more “official” support and documentation on this topic? While the coupling of FLAC3D with PFC is somewhat extensively covered in the manual, there is not a single page (to my knowledge) about the coupling with 3DEC. And after a - admittedly quick - glance at your example, it looks like some more explanations on the coupling logic, requirements and limitations would be appropriate.

Well, this is totally unofficial. Coupling between PFC and FLAC3D is facilitated with commands, documentation and examples. There is no “official” coupling between FLAC3D and 3DEC. There are very few situations where this would be useful since you can just run 3DEC like a continuum by putting no joints in it. So we haven’t put any effort into documenting this capability. I provide these FISH functions as an example of what you could do and make no guarantees that they will work in every model. Use at your own risk!

Thanks for the clarification @jhazzard.

Based on the outlook presented at the end of the Itasca Symposium 2020 I had the impression, that the unification and coupling (especially also 3DEC-FLAC3D) of the Itasca codes was the “next big thing”.

I’ll agree that with the lesser requirements on block structure in 3DEC7 in comparison to 5.2 the applicability of 3DEC in continuum modeling has increased, but given that 3DEC is still restricted to purely tetrahedral meshing, I think there very well is a possibility for interesting use cases for such a coupling (e.g. discontinous pillars in a larger hex-dom FLAC3D-model).

Thanks again for the example, I’ll play around with it a bit