I am modeling a braced excavation where before excavating below a given level, an intermediate shell is created that is reinforced with transverse beams as in the figure: 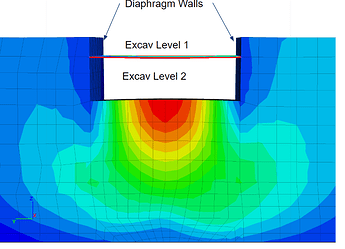 where the bracing consists of a shell and struts, which should add bending resistance to the shell.

For reference, I am creating the shell first, after Excav 1 but before Excav 2. This creates links between the shell and the soil below, which will be excavated after creating the beams.

I then create the beams using the following data file:

This does create some links but I’m not sure with they are with the shell or with the zones: 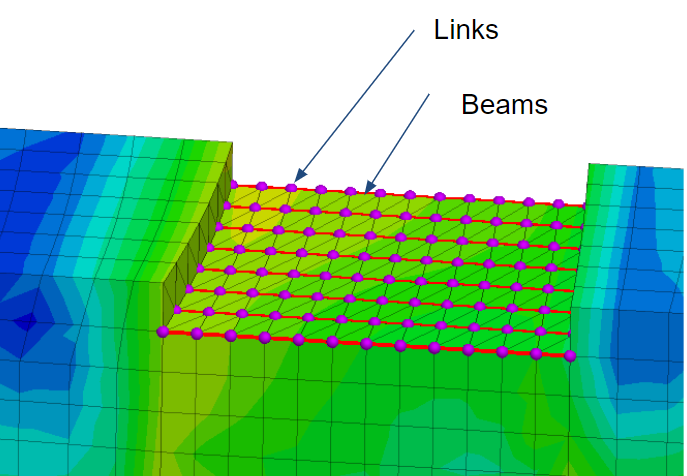 However, when I excavate below using cmodel assign null, this removes the links: 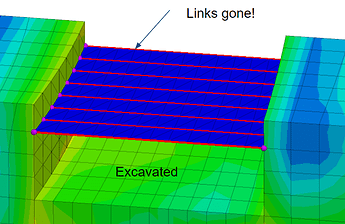 And the beams are not linked to the shell, as shown below with 10x scale: 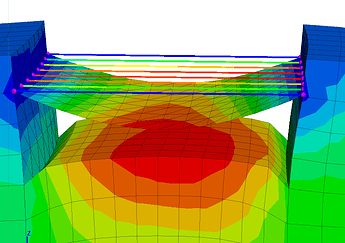 I tried to make the nodes coincident between beams and shell, and even tried struc node join after nulling out the zones, in which case I get an error that reads:

Please let me know how to join the beams to the shell, thank you.

First thing: you can check which is linked to which by plotting them through Label → Target of Link after you add relevant structure elements into the plot.
Secondly: the Manual actually tells you everything (almost), though you have to read it carefully.
To your question:
When you create the beams, it will create nodes which are linked to the zones such that the translational DoF are rigidly connected to the zones and the rotational DoFs are free (if there are zones in nodal locations). However, by default, there is no interaction between the nodes of the beams and nodes of the shells.
If no link to zones is desired, then the links may be deleted with ‘stru link delete range id = 1’
If you want to create links between the nodes of the beams and shells, use: ‘stru node join’
Double check whether you have done it peroperly by plotting.
Note that the above may not be universally applicable depending on other modelling details. However, you should be able to figure out the correct way by reading the manual section related to these commands.
Enjoy FLACing