Hi, I am modelling a half inverted bucket anchor in soil (see first figure below), pulled by an inclined concentrated force. The bucket was modelled with liner elements with different thickness along depths, as shown on the second figure. The density and young’s modulus are the same for the liner elements. However, the distrubution of the normal stress does not seem to be correct along the trasition of the segment of liner elements with different thickness (see 3rd figure; note that Side 1 is outside of the bucket, no issue on Side 2). I understood that the deformation will vary between liner elements with different thickness. However, I guess the direction of the deformation, and hence the direction of the pressure should not change due to different rigidities? I have also plotted the local co-ordinate system for all the nodes on the 4th figure below; x-is tangent to the surface, y is vertically upward, and z towards inside. I did notice that z is slightly different for the sharing nodes of liner elements of different thickness, which is joined by “struct node join side 3 range id = 3, 4”.
Note that this issue (in addition to the unreasonable stress at the tip of the skirt, as mentioned in my another thread) does not alway happen, but it does occur quite often,in particular for low interface strengths. I guess this could be an issue associated with the interface logic, instead of liner elements itself? Could someone in Itasca please look into the problem? I can send you the data files, if it helps. 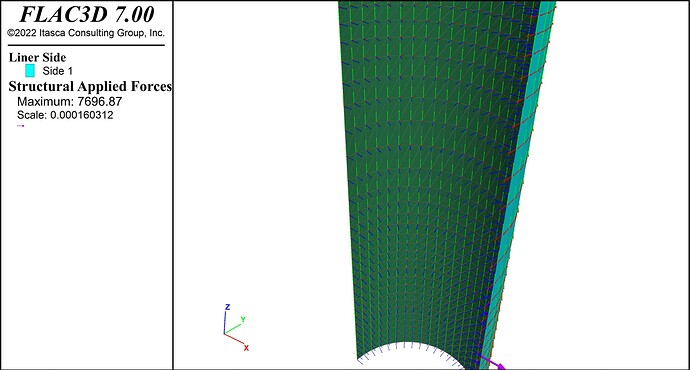 Everything you bring up seems correct, and I am not sure why the normal stress on the liner wall are what you show. Are you using interfaces together with liner elements at the same locations?

I think it would be prudent to send this model to FLAC3Dsupport@itascacg.com. We can take a look at the model to try and identify the issue.

Thanks! I have sent the files to Itasca, hoping they can solve it. To answer your question - I did not add addtional interface to the liners. Only gave properties to interface elements (i.e. links), which comes automatically when generating the liners.
Another possible cause I can think of is that along the connection between the two segments of the skirts of diffrent thickness, there are overlapping nodes which were joined together rigidly. I am not sure whether this caused any complication.

Have you recieve any anwer? I also want to know the solutions of that.

Not yet. I believe they are working on it. 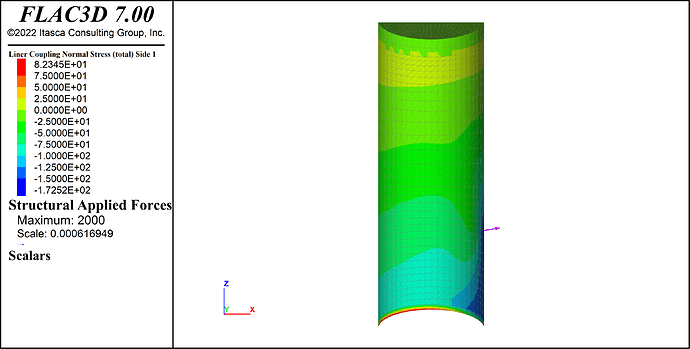