Hello,
What distinguishes local (struct axial) from global (struct cable) reinforcements in a 3DEC model? How do they vary when simulating actual rock bolting scenarios?
Does it imply that “local” just refers to the rock bolt? and global meaning grouted rock bolts?
Please provide some insights.
Thanks,
Vijay

Local reinforcement only acts on joints. They resist shearing and opening of joints. They have no effect the unjointed rock.

The cables can act on the whole rock mass. But, forces only act on the cable in the axial direction - so if it is perfectly perpendicular to the joint, then there will be no resistance to shearing. If it is at an angle, then some component of the axial force will act to resist shearing.

The hybrid bolts are essentially a combination of the cables and the local reinforcement. This is probably what you want to be using most of the time in 3DEC.

Hey Jim, I happen to have questions related to the model for dynamic rockbolts in 3DEC. I am hesitating which structural element might be a better choice for rockbolts such as Swellex Mn24 or D bolt with anchor points along the bolt length/end?

Hybrid bolt has its advantage by taking into the consideration of resistance to large deformation and strength (both axial capacity and shearing), then raised the following questions:

I don’t know if anyone else encountered similar questions and sometimes not being able to find references is a bit annoying.

Much appreciated if any useful suggestion is given. Cheers

Hi @Pin_not_code
Those 3 extra rockbolt properties “stiffness/yield/strain limit” can be attained from the bolt manufacturers performance data and pull-out test results from actual mine sites. If you need references on bolt mechanical properties for D-Bolt, check out a recent publication Performance of dynamic reinforcements to restrain remote triggered strainburst associated failure - ScienceDirect 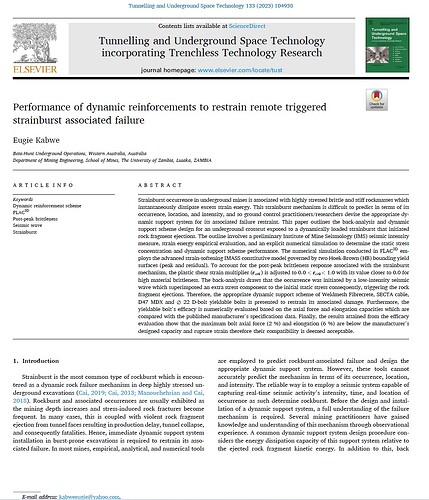 Including the handy calibration tool.