Hello. We have got an AMD Ryzen Threadripper PRO 5975WX 32-Cores, 64 RAM and NVIDIA GeForce RTX 3080. Once all components and updated drivers installed, we have made a speed test. We are far away from a same processor as is seen in the attached image. 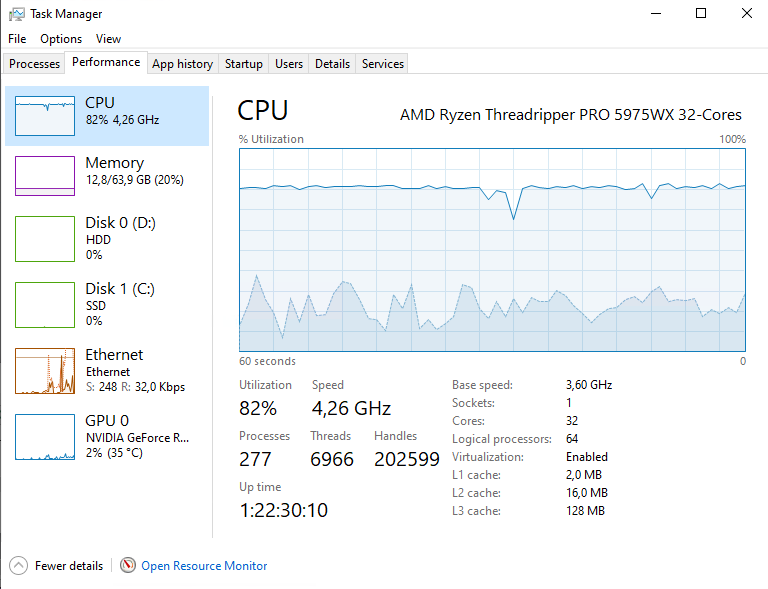 I have several questions:
-Comparing the two performances in the benchmark, the faster is with version FLAC3D_700.154, should we change to that version?
-Could we get more speed from the graphics card? It seems that is not providing much.
-When testing for the benchmark, CPU was running at 100% utilization however our model not (much smaller) as we can see in the image above. Could we do something to improve CPU utilization?
-Hard disk is encrypted and has an antivirus installed, could it be a problem?
-Would the processor perform better using Linux?

I will much appreciate your help. Many thanks!

I can suggest the following:

Thank you Jim for your answer. We are going to try installing eight 16 GB RAM modules and populate all eight RAM slots on the mainboard as said on the website. Regards.

I would suggest using the same machine to test, although I noticed that these two machines are with the same essential hardware specifications, but others, e.g., software (OS et al), RAM usage, even machine temperature, can have some effect as well.

BTW, my test with my machine on these two versions showed almost the same speed.