Speed tests for FLAC3D and 3DEC

Check out speed tests for different computers running FLAC3D and 3DEC here. This is a work in progress, but have a look to see performance on different architectures - and even add your own!

I have used these speed tests. I was wondering about the number of cycles that are occurring in each test. By cycling only 50 steps for each iteration and having such a rapid start-end interval on the higher end machines, is that actually representative of the true system speed? I wonder how sensitive the results are to the number of cycles and if you extend it to 500, do you get a different balance between clock frequency and core count. In operation I have seen the 3975x CPU’s not achieve the theoretical speed advantage of the benchmarks, likely due to a large number of single-threaded processes that likely occur both in the standard cycling, but also with FISH functions etc. In such a case, the lower clock frequency of the 3975x might actually cause it to lose some of that advantage. Thoughts?

That’s a good question. I expect @jfurtney has thought this through. But I will do some experiments and report back.

OK - here’s some results. This is the speed test that comes with FLAC3D (DataFiles3D\FLAC\UsersGuide\ProblemSolving\Miscellaneous). I bumped up the cohesion so there was no failure, and then ran for different numbers of steps. Each data point is the average of three tests.
I can’t really explain these results, but it suggests you probably want to run around 5000 steps to get an accurate speed estimate. This is a 10-core i9-9820X 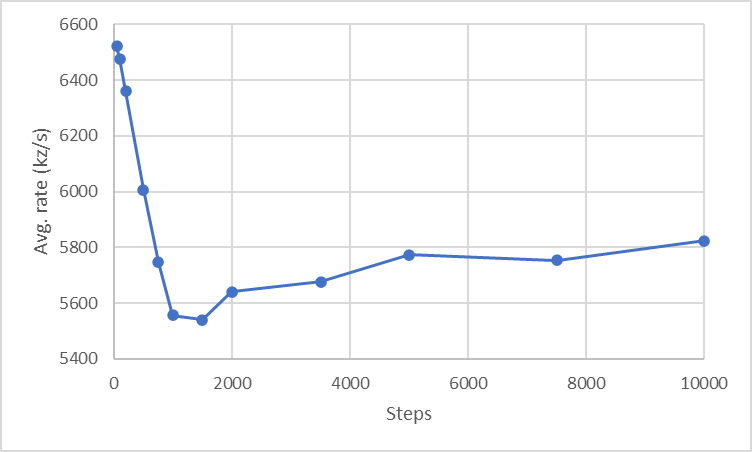 Could this be adapted into the cloud benchmarking so it runs that full automated process, or a parallel version created and tested on a few machines with various configurations? Obviously we have a huge reservoir of existing tests we don’t want to have to re-do, but I think it is worth exploring the impact. I think the increased steps likely parallels “real world” better and may shuffle the deck a bit between the AMD and Intel offerings.

Yes - agreed. I’ll talk to the team here and figure out the best way to consider this.