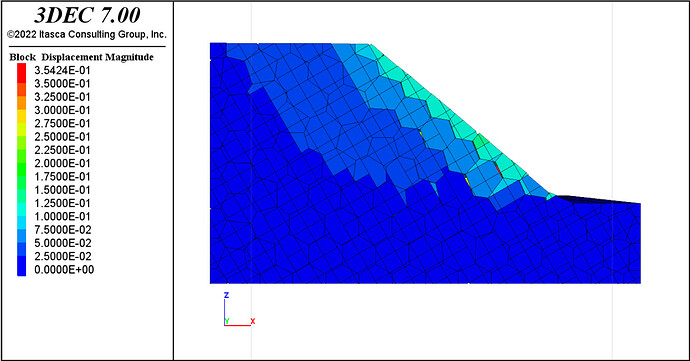 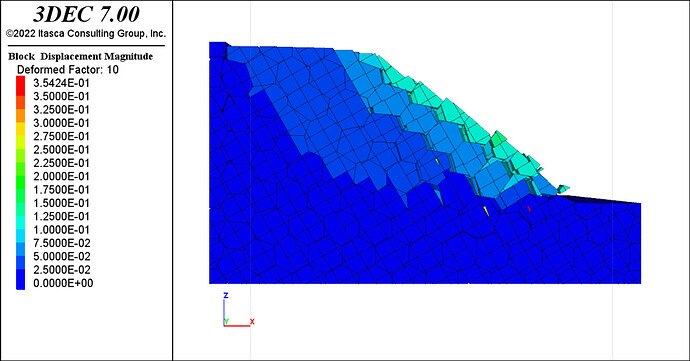 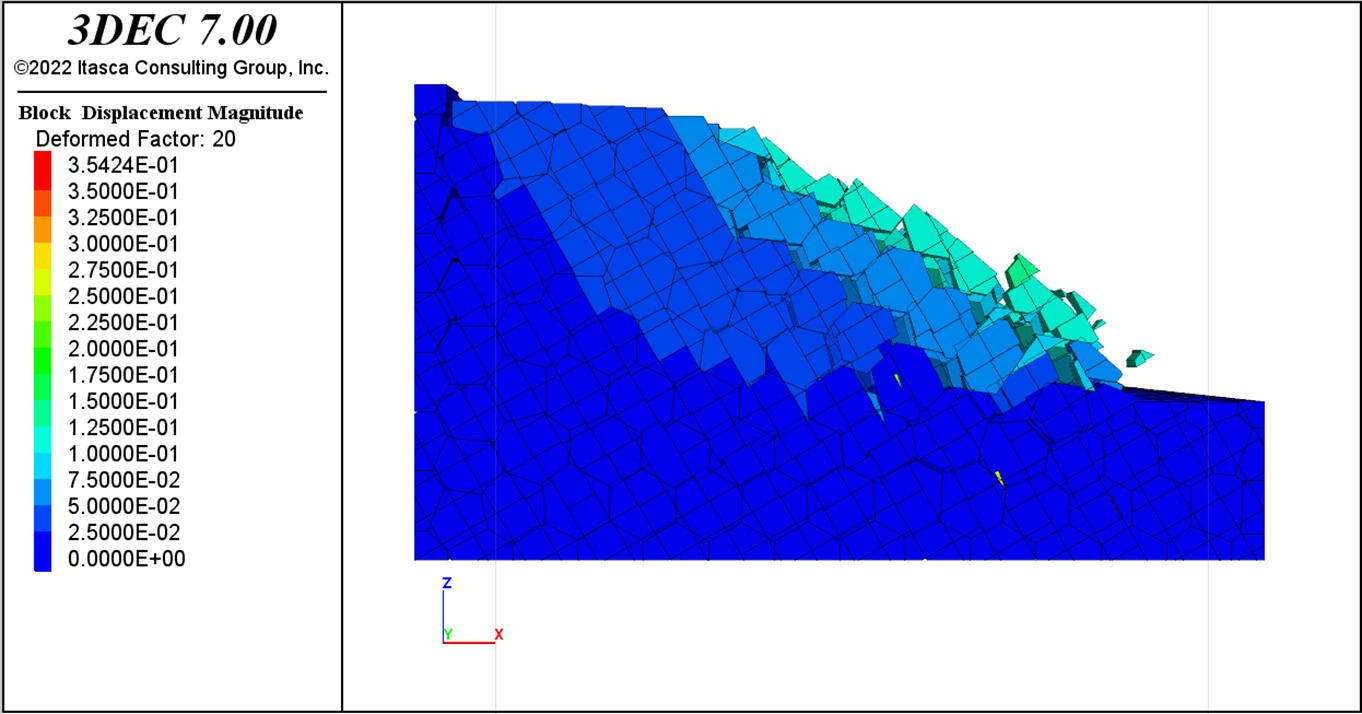 The “real” displacements are the one from your large-strain simulation. If things don’t “move as much as I want” then you probably need to either change parameters or cycle more steps (if for example the slope is still sliding).

The deformation factor is just an optical magnification, so that the calculated displacements are multiplied by a certain factor for illustration. This is sometimes useful for giving a sense of real deformation in small-strain analysis. Oddly enough, it seems that even a deformed factor of 0 seems to already affect the plotting from my experience, which is why I always kept away from that plot option.

But most importantly for your question: It really is only an exaggerated view and is not the real modeling result!

@markus Okay I get it. Thanks for the advice.

And with that I just wanted to ask another thing related to the above model. Now since I am hoping for a deep seated sliding from the model above, and the options I tried are reducing the strength parameters near to zero as in strength reduction and the blocks are rigid for faster simulation. But it seems that deep sliding is not taking place in this particular orientation of joints. Mostly its like a shallow sliding of the topmost layer of voronoi blocks. The picture below is the final result of cohesion and friction angle of material and contacts reduction to their lowest. 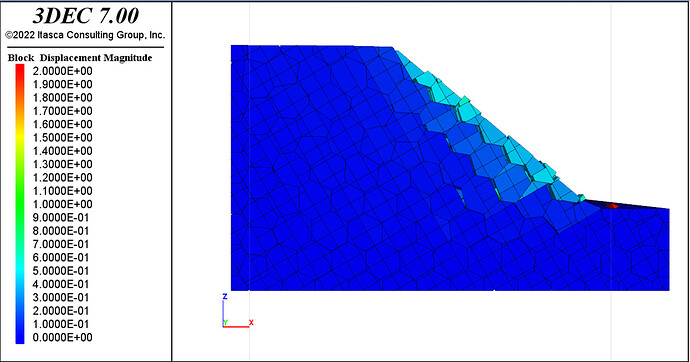 So my next idea is to add joint fluid flow through the joints and Voronoi joints. But I found out that coupled fluid and mechanical analysis cannot use large strain on. So my question is even if I add fluid flow can the model have a larger deformation since it will be small strain only. Is there any other way to make the model weaker to enable deep seated sliding? Thank you.

Good idea in principle. When you can assume some groundwater flow, this will obviously weaken your joint strength since the effective normal stresses are lower. Depending on your specific problem, a fully coupled analysis might not even be neccessary to model this.

A couple of points:

My suggestion would be to simple assign an “effective” friction angle, which takes account for a potential groundwater pressure.

We have found that Voronoi blocks are too “strong” in 3D because of the interlocking. In reality you would need to have breakable grains to make this realistic. Generally we use tets. Even though they give “aligned” failure planes, they appear to produce more realistic results.

Okay thanks I get it.
For the 1st point a) You mean this way -
http://docs.itascacg.com/3dec700/3dec/docproject/source/theory/fluid/fluid_porepress.html?node2273#no-flow-example

b) I tried very low friction angle even checked with 0, but the result was the last picture I showed.

For the 2nd point - Cannot use large strain in fluid analysis, this dialog box pops up. 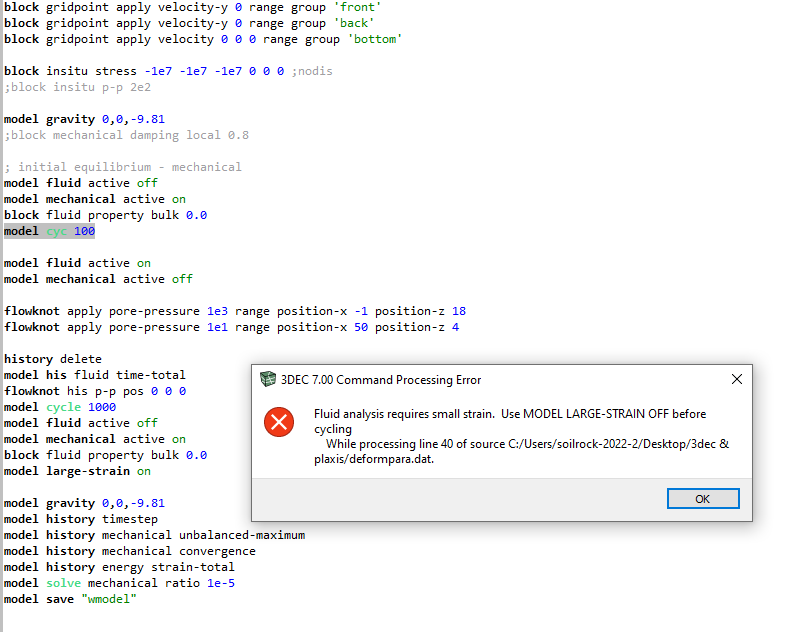 So I am thinking of 1 way coupling or undrained flow examples given in itasca website.

I tried very low friction angle even checked with 0, but the result was the last picture I showed.

Ok, then it really is the structure itself that is too rigid due to how the blocks/cracks are constructed (as @jhazzard has correctly suggested). Even considering fluid flow will probably have no effect then, so you can at least spare yourself that trouble

Cannot use large strain in fluid analysis, this dialog box pops up.

Then this is new in 3DEC7. In 5.2 it was still possible. And I also think that it should be possible, since I often have systems where the fluid flow occurs in one region, but significant deformation in another different region. Of course this means that the user must be aware of what he is actually doing, but then again this is case for most applications.

Thanks for the advice. Okay I will try with tets instead of Voronoi blocks. I once tried with very small voronoi blocks like grains but it takes very long time so I switched to bigger Voronoi. Is there any command to make the simulation faster even if the model has many grain sized tet blocks? I am also using rigid blocks for faster cycles.

hello, are the blocks in your model rigid blocks? I use voronoi to simulate sand stone layer which contains EPB tunnel to be excavated, i got strange results, Stress concentration happened in unknown zones(one or a few), i wonder if you have ever met such a situation

Hello, if you are using zones then the blocks become deformable. If you want rigid blocks, don’t use zone. Yeah stress concentration happens sometimes with small deformable blocks. For me I use block delete range volume 0 0.01 command to remove those small blocks and the problem gets solved. Or change the zone edge size.