Hi, we have tried to modify the cavity expansion example in both FLAC and FLAC3D ([file:///C:/Program%20Files/Itasca/FLAC3D700/exe64/doc/flac3d/zone/test3d/ExampleApplications/CavityExpansion/cavityexpansion.html?highlight=undrained%20cylindrical%20cavity%20expansion%20cam%20clay%20medium]), in order to perform it in the purely frictional material using the Mohr-Coulomb model. However, we have odd observation in both FLAC and FLAC3D when the ‘large strain’ is switched on: the radial stress starts to reduce after the plastic zones reach the zone at the far side, see below. The results appear to be reasonable for small strain. We are not sure whether something wrong in the large strain formulation? It is also weird to see the entire soil body eventually becomes plastic regardless how faraway the zone is. My file is attached.
CavityExpansion.dat (3.2 KB) 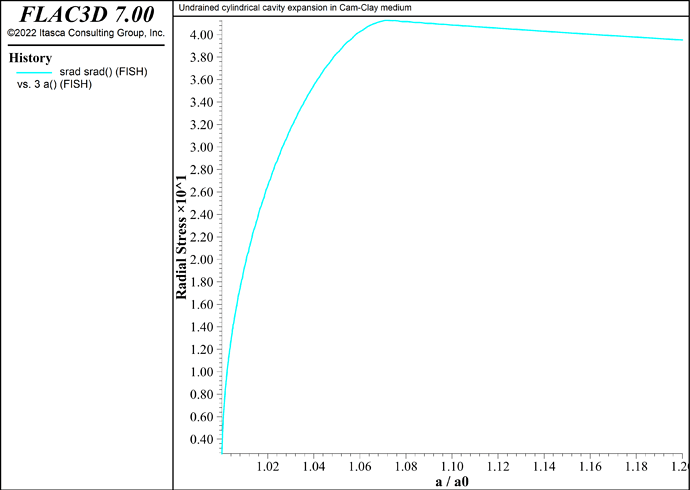 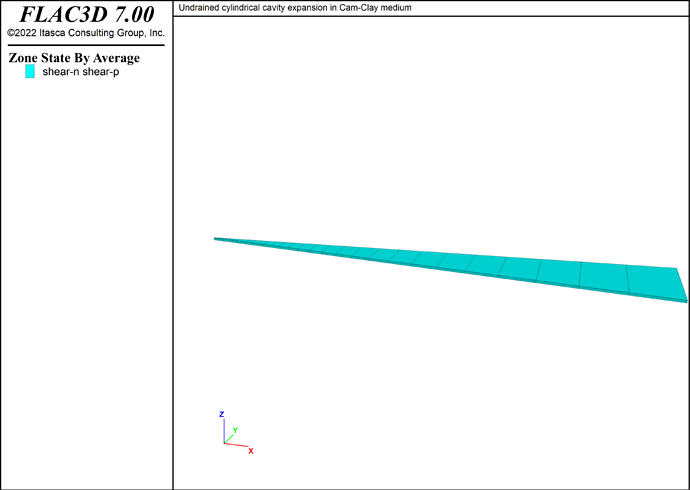 The mohr-column model will only fail in shear, not in volume.
You are applying a velocity boundary condition to the inside of the cylinder, and a pressure condition on the outside.
This means that the zones will first fail in shear, and then the pressure will monotonically increase as the displacement/force on the inside of the cylinder accumulates.
This will inevitably propagate failure outward until it eventually reaches the boundary.
Note the velocities that form on the outer boundaries, indicating the entire cylinder is expanding outward. The boundary conditions are no longer valid, as this movement of the outer boundary does not result in an increase in normal stress (assuming you are attempting to model a cylindrical hole in a mohr-coulomb media).

In large strain this movement outward results in the actual expansion of the zones - they get bigger. This will tend to reduce the pressure.