Hello everyone. Can anyone tell me whether we can use or create Voronoi elements in 3DEC 5.2 and show minor fractures? In my case I have to simulate a cylindrical specimen with very small Voronoi elements for the UCS test and record the shear failure damage pattern. Can the poly option in 3DEC 5.2 do this? Thank you.

I believe Voronoi generation was brought in for 3DEC v7. You could generate them with a different software and import them to 3DEC if you wanted though? e.g. https://neper.info/ and publications e.g. Ghazvinian et al. 2014

@jmswdmn , I generated elongated voronoi tesselation in neper and trying to import into 3DEC. The probem is that the actual geometry is not reatined after importing into 3DEC.

I could not figure out what I am missing here. Are tesselation facets triangulated because the file format is .stl? Apprecitaed if you can give insight on this. 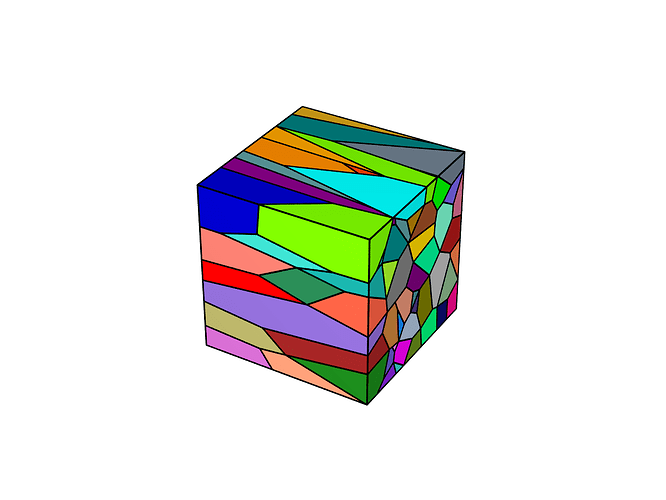 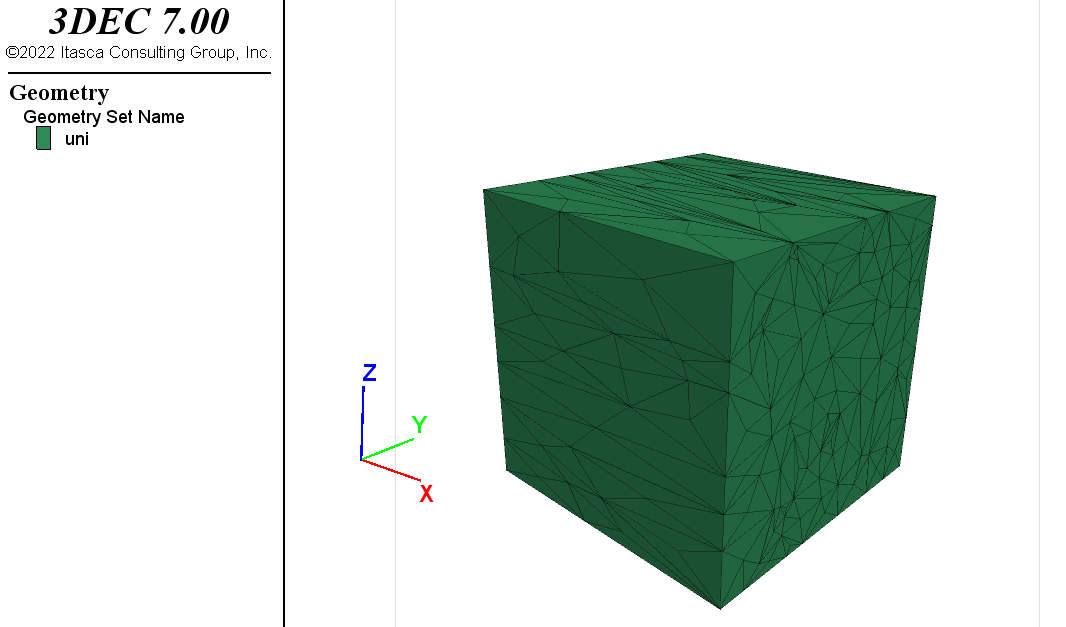 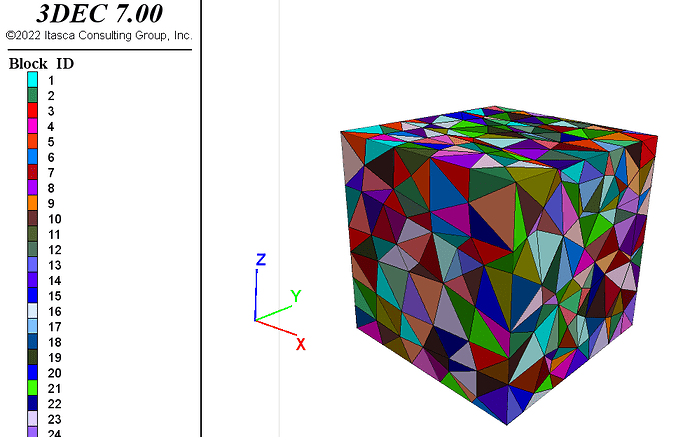 checked and solved with @pprasad offline… for others benefit block generate from-geometry merge correctly generates the blocks from the .stl 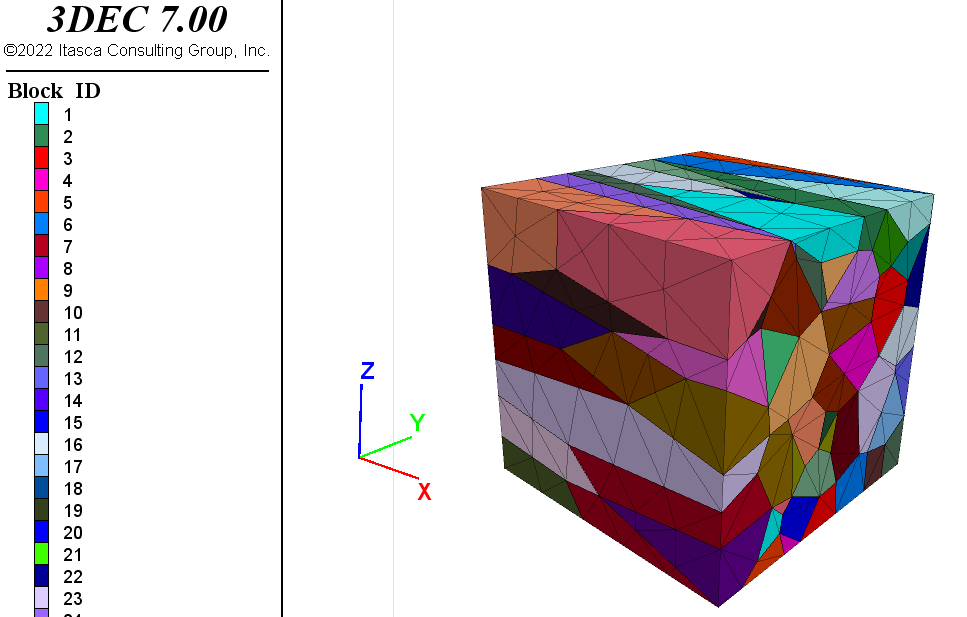 @jmswdmn can you tell me if I do the same in 3DEC 5.2, what will be the command for generating the block from the .stl geometry file with proper merge? Thank you.

There is no generating from geometries in 5.2. And there is no merge in 5.2. These are both new features in v7.

@jhazzard I have sent the pictures of my voronoi geometry. How can I turn it into smaller blocks in 5.2? Is there a way? Thank you. 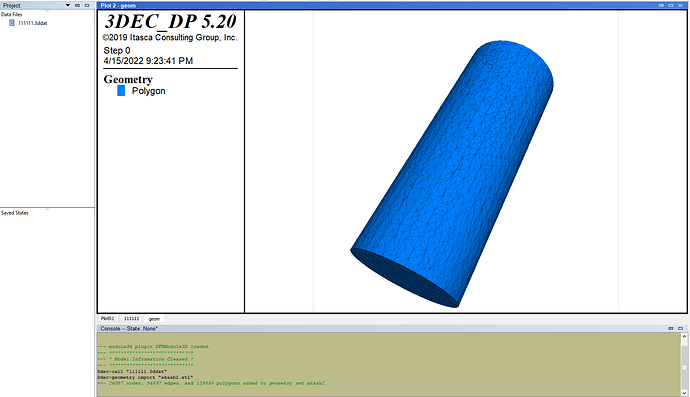 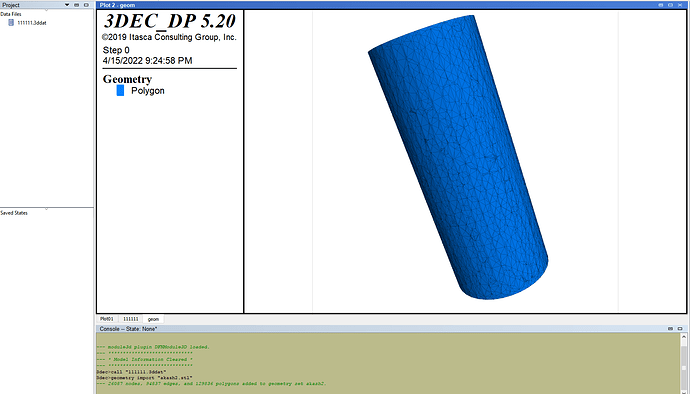 You can try the densify command, but note that 3DEC 5.2 is no longer officially supported.

@jhazzard Yes, sorry for the trouble about 5.2. The thing is as mentioned by @jmswdmn about the research paper 3D random Voronoi grain-based models for simulation of brittle rock damage and fabric-guided micro-fracturing - ScienceDirect , I see they used an older version of 3DEC, not 7. But I see they changed the geometry to block like the voronoi ones through an .stl file using neper and did some good simulations. I used the densify command as you said, but since no blocks, its only a geometry, so it did not cut anything. I was hoping I could turn this voronoi cylindrical .stl geometry (shown in the pictures) to a similar bonded cylindrical block in 3DEC 5.2. Because 3DEC cannot do simulation with geometry (like showing displacement,etc ), need it to be changed into block. Thank you very much for the suggestions and help.

i have not tried it, but the neper tessellation module has a .3dec file output option rather than .stl. see documentation here: Tessellation Module (-T) — Neper 4.4.1 documentation

I tried it but could not find a way to import the file with extension ‘.3dec’.
As per the doccumentation, geometry import command takes ‘.dxf’,’.geom’ and ‘.stl’ formats as inputs, not sure about ‘.3dec’. The neper exported '.3dec' file looks like this (also attached the original file)

This doesn’t look like a .3dgrid file to be imported using block import command.

yes, this works for import into v5.2 with call command 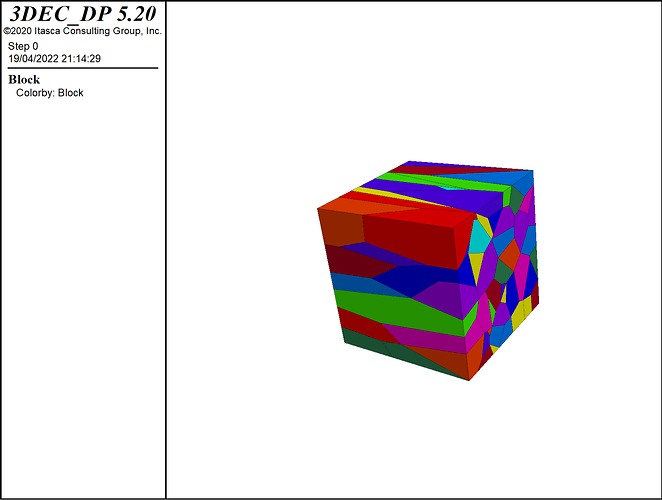 Have you just imported the ‘.3dec’ file? Would you mind providing the full command you have used that ?
Thank you,

You can convert the 5.2 data file to version 7 format. Just open the file in 3DEC 7 and go to Edit - 3DEC Command Conversion. It may take a while for a big file, but you only need to do it once.

That works perfectly. Thank you.